Originating from the Gulf Coast of Louisiana, there are many stories as to the origin of the po’ boy. One theory claims that “po’ boy” was coined in a New Orleans restaurant. In 1929, during a four-month strike against the streetcar company, restaurant owners in the French Quarter served the strikers free sandwiches, and would jokingly refer to these men as Poor Boys, or in the shortened Louisiana dialect, pronouncing it Po’Bo’s.

Po’ Boys are an integeral part of Lousiana culture, especially so in the French Quarter where there are a wide variety of po’ boys purveyors serving these classic French bread sandwiches. From die hard vetrans who reminise about old skool classics, such as the hot roast beef po’ boys dripping with gravy, to young maverick foodies who draw on the abundant local resources of the Gulf and bayous, resulting in almost any variety of sandwich permutation makers can dream up. Fried seafood are the most popular versions, as well as hot or smoked sausage, ham and cheese and hamburger, are also common.

The Po’Boy is the most consumed of all lunch items in Louisiana. Even after the changes in society, industry, fashion, food culture and technology over the years, it remains the sandwich of choice. Often you will see in BBQ and ‘Soul Food Restaurants’ a selection of Po’ Boys based on the main courses. Po’ Boys traditionally offered are fried shrimp or fried oyster Po’ Boys. Others include pulled pork or barbecued brisket. As the name suggest there are usually no other componants, other than the bread and the filling accompanied by some Tabasco or hot sauce. A dressed Po Boy, is a topping of shredded lettuce, tomatoes, mayonnaise and pickles inside the filling.

I was was working at a soul food restaurant when I first came across Po’ Boy sandwiches, before that I had never heard of the term before. After discovering the world of Po Boys, I found that there were no hard and fast rules. What makes a po’ boy special is the bread. A po’ boy isn’t a po’ boy unless it’s made with good quality, fresh French bread. New Orleans French bread has a crunchy crust with a very light center. The secret behind the Louisiana baguette is the extra rising by the yeast because of the humidity and high temperatures.  Po’ boys never really took off in Camden…….just couldn’t find or agree on the ‘right bread’.

Making your own Po boys is a great alternative to the numerous Subway outlets serving processed fillings high in salt. This is a great recipie I came across whilst at work, using a spicy pork sausage glazed in maple syrup for a complete sweet and savoury combination. Using a good quality sub roll will do it justice, if you can’t get hold of a New Orleans French baguette or the ‘right bread’, which in the end as with most things, was a matter of opinion.

For the maple glaze:

Dijon Mustard – to spread at your discretion

Mayonnaise – to spread at you discretion

Tobasco or hot sauce – at you discretion (optional)

1. Combine all the ingredients for the maple glaze thourghly.

2. First on the char grill mark your sausage, remove it from the grill and using a basting brush base the sausage with the spicy Maple glaze. Finish the sausage in the oven about 8 top 10 minutes.

3. Cut the baguette open, ¾, warm the bread opened faced under the grill, let it slightly brown.

4. Spread the bottom half with Dijon mustard and the the top with mayonaisse, and start assembling the sandwich.

5. When the sausage has finished cooking, brush with the glaze once more, remove from the pan, and thickly slice on the diagonal.

6. Add a layer of the sausage to the sandwich, followed by the lettuce, onion and tomato. Add the Tobasco or Hot Sauce if using.

7. Finish assembling the sandwich using wooden skewers to hold it in place, serve with fries and coleslaw if you wish to do so. 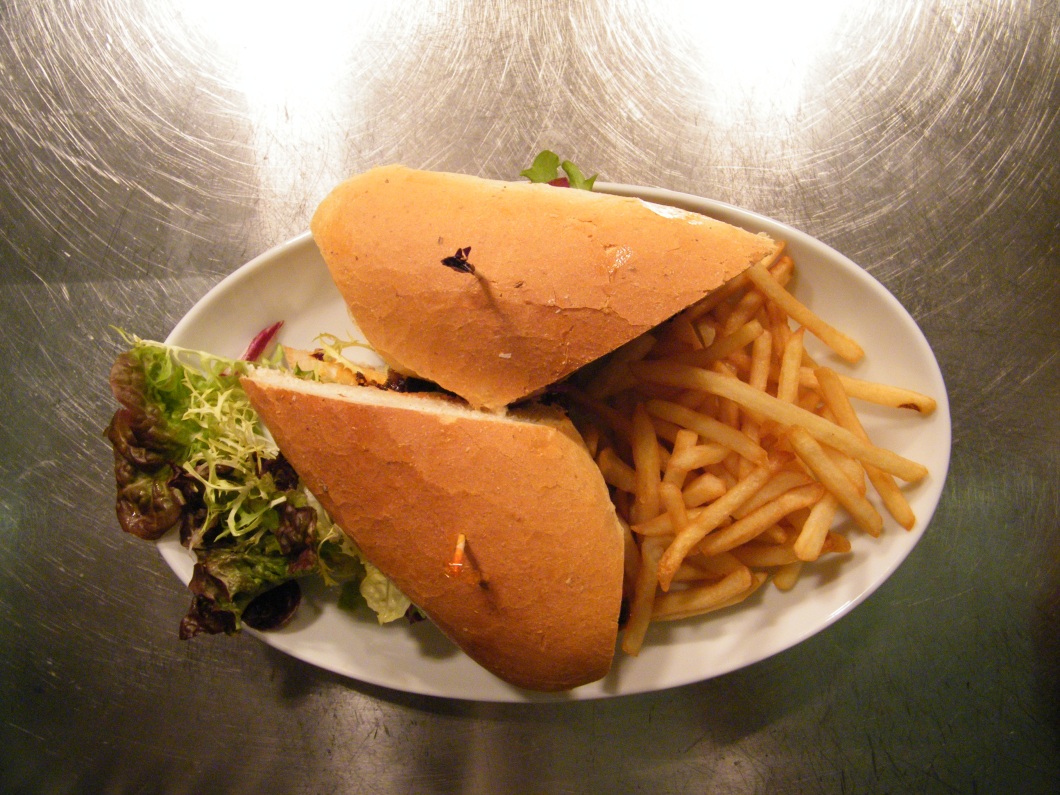