Gumbo is a stew and/or soup which originated in the South Louisiana area. It consists primarily of a strong stock, meat or shellfish, a thickener, and the vegetable “holy trinity” of celery, bell peppers, and onion. Gumbo is often categorized by the type of thickener used: the African vegetable okra, the Choctaw spice filé powder, or the French base made of flour and fat, roux. The dish is likely to derived its name from either the African word for okra (ki ngombo) or the Choctaw word for filé (kombo). 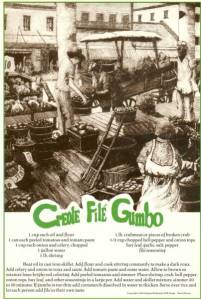 Two main varieties of gumbo exist. Creole gumbo generally contains shellfish, tomatoes, and a thickener. Cajun gumbo is generally based on a dark roux and is spicier, with either shellfish and/or fowl.

Creole refers to the combinations that were traditionally common in New Orleans and southeastern Louisiana. In these areas, significant portions of the population were descendants of settlers from France or Spain, and were known as Creoles. The Cajun combinations were often found in Southwestern Louisiana, which was populated primarily by Cajuns, descendants of the French-speaking settlers who were expelled from Acadia in the mid-18th century.

Filé powder, also called gumbo filé, is a spice made from dried and ground sassafras leaves. It is used in the making of some types of gumbo. It is sprinkled sparingly over gumbo as a seasoning and a thickening agent, giving it a distinctive flavour and texture. Filé can provide thickening when okra is not in season.

Whilst working in a soul food kitchen, I developed my own take on Gumbo after a lot of research, and scouring around London to find a decent example of one……….’I had to, as I was a ‘Gumbo Virgin!’; What I found was, that there was no set formula. There are so many gumbo recipies out there, each with its own unique take on the dish, as history, culture, tradition, seasonality & personal taste, have all been essential elements of any recipie. The real ingredients come from within: within the cook in you, from your heart, your soul, your passion, will all play their part, to what has been a ‘Soul Food Odyssey’.

This interpretation is neither Creole nor Cajun. But what I feel it does reflect, is Louisiana’s legacy of colonialism, the vast range of gumbo-preparation techniques practiced by the different niche cultures, traditions and values which make up the region’s complex ethnic fabric. However the time honoured traditions of the roux and the ‘holy trinity’ of onion, celery and peppers are present, as they are the corner stone of any Gumbo Philosophy. 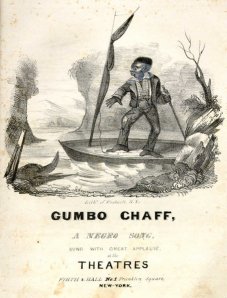 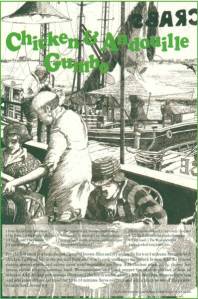 1) Heat the oil in a large saucepan, and seal the chicken, andouille and chorizo sausage. Do it in batches and in that order as the chorizo will discolour the chicken and andouille sausage.

2) Pour of any excess fat from sealing the meat, and in the same saucepan sweat of the ‘holy trinity’ of onion, celery and peppers, for about 5 minutes or so.  Add the garlic, chilli, herbs and spices, (except the filé powder) and cook gently for a further 4 – 6 minutes, until the spices have released their aroma.

3) In the mean time combine the flour and butter to form a roux, and gently cook in a separate pan, being careful not to burn it. Cook it until it turns a light nutty brown colour. The longer and darker you cook the roux at this stage, the deeper and darker the sauce of the finished gumbo.

4) Add the sealed meats, sweet potato and chicken stock to your main saucepan. Combine all the ingredients thoroughly, and then add the roux.

5) Simmer gently for around 25 – 35 minutes, until the vegetables are tender and the meats are cooked through. Adjust seasoning with salt and pepper. Remove from the heat and stir in the filé powder to your discretion.

6) Sauté the prawns in a little butter, salt and pepper until just tender.

Serve the gumbo in deep bowls on a bed of Creole boiled rice, garnish with a couple of prawns, spring onions and a lemon wedge for some extra zing.