With the asparagus season in full flow, the taste of British asparagus is hard to beat. Here’s my list of top 10 facts to celebrate all things asparagus: 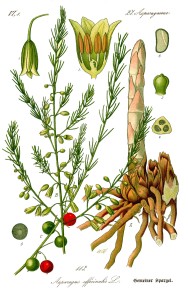 1) The Romans cultivated asparagus as far back as 200 B.C., eating it both in season and preserving for later consumption.

2) Asparagus is very low in fat and cholesterol; and a typical stalk is less than 4 calories.

3) Asparagus officinalis is native to most of Europe, northern Africa and western Asia.

4) There is a recipe for cooking asparagus in the oldest surviving book of recipes, Apicius’s third century AD De re coquinaria, Book III.

5) Asparagus contains substances that act as a diuretic, neutralize ammonia that makes us tired, and protect small blood vessels from rupturing. Its fiber content makes it a laxative, too

6) Romans, from Pliny to Julius Caesar to Augustus, prized the wild variety. In fact, the emperors were so fond of asparagus, that they kept a special asparagus fleet for the purpose of fetching it.

7) Asparagus first appears in English print around 1000 A.D. It cannot be definitively tracked to any one specific area of origin, although it is known to be native to the eastern Mediterranean and Asia Minor areas.

8) White asparagus – preferred in Europe, these sunlight-deprived stalks are a little milder and more delicate.

Asparagus is abundant in late spring and goes with so many things   salads, oranges, seafood, lamb and chicken. It’s also delicious by itself, as well as a nutritious breakfast component, and so quick and easy to prepare.

Pre-heat the grill. Blanch asparagus in boiling salted water and refresh in iced water. Drain on a tea towel. Heat a non-stick fry pan over a low heat, add butter and fry eggs gently without colouring and season. Grill asparagus and bacon for a minute on each side. Serve four spears and two rashers with each egg.