“Nothing builds an intimate bond like a shared secret”

If the success of the food ‘pop-up’ shop phenomenon over the last year or so has taught us one thing, it’s that foodies love the thrill of the chase and the satisfaction of being a part of anything that’s scarce, ‘underground’ or limited to the few. The secret menus craze began at US chain In-N-Out Burger, when customers began asking for off-menu items, the trend is fuelled further by internet bloggers who write about menu items they have discovered.

The craze quickly spread to McDonald’s, and the other big fast food chains soon followed. Unusual permutations and combinations include the Monster Mac, using eight McDonald’s meat patties, and the Land, Sea and Air Burger — a slice of fried chicken, two beef patties and a Filet-O-Fish. At Starbucks’ customers can enjoy “secret” drinks such as a Dirty Chai, mixing a chai latte with an espresso shot. In the UK Subway, Starbucks, KFC, Burger King and even McDonald’s have secret menus that are recommended by their respective fans. Fast food menu items come and go, but only a select few develop a cult-like fan base. Consumers also love knowing insider information and being up-to-date on the latest news and trends.

Creating this kind of exclusive content triggers people’s desire to be ‘part of the club’ and gives them an incentive to engage with food retail outlets online. It also helps to turn regular visitors into loyal fans. Here’s my compilation of some of the most notable (and somewhat hideous) secret combinations and limited edition menu items that have developed a true cult following. They aren’t always available at every location, but maybe worth asking for next time you’re ready for your fast food chow down.

In the 1990’s, McDonald’s added family sized and personal pan pizzas to their menus across Canada, earning them a reputation as one of the most popular ‘fast’ pizzas around. However, when the food chain suddenly discontinued the item, loyal customers were outraged and began an on-line petition to bring pizza back to McDonald’s. Their efforts have been in vain, however. McDonald’s currently has no plans to bring back pizza to its menu.

Burger King’s Suicide Burger comes in the form of 4 beef patties, 4 slices of cheese and bacon, with a secret burger sauce. As the name may suggest…this may indeed kill you, but it will also transport you directly to fast food heaven. You want it your way…you can!

The McRib is the result of intensive marketing by McDonald’s. Utilising the basics of supply and demand through creating scarcity over the McRib by only releasing the culinary abomination for a fraction of the year that is only known once it is released, McDonald’s fans have been known to ‘hoard’ McRib sandwiches and eat them in extreme excess. It’s even a topic of the popular documentary Super Size Me, where film-maker Morgan Spurlock (who gorges himself with McDonald’s for 30 days only to find serious health consequences) encounters ‘McRib hunters’ who actually travel the country eating McRib sandwiches. 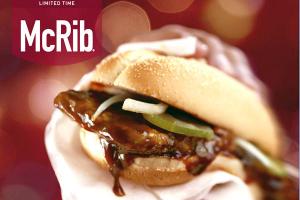 McDonald’s even made McRib fans sign a petition to ‘save the McRib’ online, bringing out a conglomerate of fans to bring back their favorite forsaken sandwich.  But the obesity?…that’s forever. Hasta La Vista…Baby!

Frings – At Burger King an order of Frings will split your French fry order with onion rings.

Chipolte will make you any combination of ingredients they have available to them.

McDonald’s has been testing an English Pub Burger in certain Illinois locations, and initial reviews are rather positive. According to marketing materials, the burger consists of “1/3 lb of 100 percent Angus beef, hickory-smoked bacon, white cheddar and American cheese, grilled onions, tangy steak sauce and smokey Dijon mustard sauce all housed on an artisan roll.”

Taste aside, I’m struggling to understand what makes this burger English. It certainly isn’t the American cheese, or the Dijon mustard…or even the Angus beef (originally a Scottish breed). This is the first “English” item on McDonald’s American menu, but not the first time that the chain has attempted to market location-specific food items. For example, the NYCrispy burger has been featured around Europe (because when you think of New York City, you think of crispness, clearly).

Turbo Hot Coffee – An extra shot of espresso in your coffee at Dunkin’ Donuts.

The McKinley-Mac – made with two quarter pound patties. Named after Mount McKinley in Alaska, and sold only in that state. Also known as the Bigger Big Mac as a limited-time offer product to celebrate the 2006 FIFA World Cup.

Animal Style Fries are probably one of In and Out Burger’s most well-known secret menu items. Order this variety and your spuds will come topped with a mass of melted cheese, grilled onions, and a hearty ladle of Thousand Island dressing. But fries aren’t the only thing that can be animalized. Just about anything you order can be served up with this creamy spread.

With the large variety of different Starbucks franchises it is important to know what’s in any hidden menu drink you order. Many should know these options however, since they are not all the same just remember the ingredients in case they do not know and they will be happy to make the drink for you.

The’ Raspberry Cheesecake Frappuccino is as sinful as it sounds. Perhaps that’s why it’s almost never found on the coffee giant’s regular menu. This decadent blend of white chocolate and raspberry is just the start of Starbucks’ secret drink line. Other hidden favorites include the Biscotti Frappuccino, the Cinnamon Roll Cappuccino, and the Captain Crunch Frappuccino, which are only available upon request.

The Shamrock Shake is a seasonal green-dyed mint flavoured milkshake dessert sold at McDonald’s during parts of February, March, and early April to celebrate St. Patrick’s Day. The Shamrock Shake was first introduced in 1970. Rogers Merchandising in Chicago created the shake. James Byrne, the executive artist at the firm, used a family recipe for the shake. Shamrock Shakes were widely available across Canada and the United States until the early 1990s. They were recently brought back and are still available at select Canadian and American stores during the month of March, as well as in Ireland.

Pizza Sub – This sub was taken of the menu in most locations when Subway began marketing itself as healthy alternative to fast food. However, upon request you can get the Pizza Sub, which combines cheese, tomato sauce, and pepperoni plus your choice of sandwich toppings. 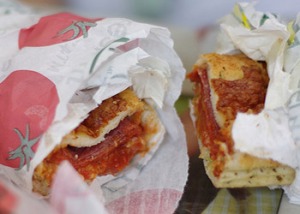 When the Double Down came out, people acted like KFC had started selling the public purer form of heart disease. Lots of folks thought the mere presence of a sandwich that uses fried chicken as a bun signified the coming of end times. But when they trialled it…everyone who tried it thought was pretty good, and proved to be very popular. The sandwich, which was supposed to only be available for a limited time, has stood the test of time and haws stayed on the menu in some outlets.

McDonald’s Big McChicken refers to a Big Mac whose buns have been replaced by fried chicken patties. This super-sized sandwich is similar to Kentucky Fried Chicken’s Double Down but is even bigger, meatier, and higher in calories than it’s competitor’s counterpart.

In 2012, McDonald’s admitted that the special sauce ingredients were “not really a secret” because the recipe had been available on-line “for years”. It consists of shop-bought mayonnaise, sweet pickle relish and yellow mustard whisked together with vinegar, onion powder and paprika.

1. Combine all of the ingredients in a small bowl. Stir well.

2. Microwave on high for 25 seconds, and stir well again.

3. Place the sauce on a covered container and refrigerate for several hours, preferably overnight, to ensure the flavours infuse. Stir the sauce intermittently as it chills. 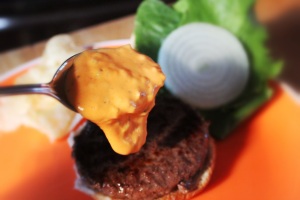