There are countless varieties of clam chowder – the most popular of which are called New England Style and Manhattan Style. 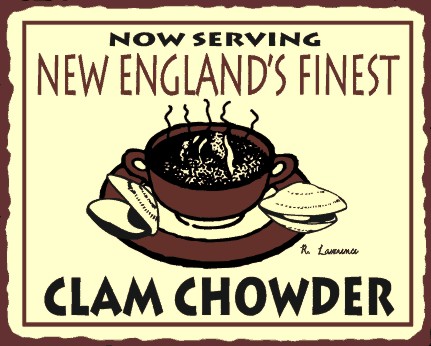 New Englanders use the Native American term quahog. The name quahog derives from the Narragansett Indian name for “poquauhock.” The scientific name, mercenaria, of these clams comes from Latin meaning “wages.” because Native Americans strung the shells like beads and used them as money or “wampum.” Quahogs replace fish in the fish-milk stews of coastal England and France to become New England chowder. Pronounced “chowdah” by people situated north of Connecticut.

The label New England Style has come to mean that the chowder has a cream or dairy base while Manhattan Style refers to a tomato base.

Clam chowder is usually served with saltine crackers or small, hexagonal oyster crackers. Throughout the United States, creamy New England-style clam chowder is sometimes served in sourdough bread bowls, especially in San Francisco where sourdough is popular with tourists and has been considered a signature dish since 1849.

“Crispin was soon hammering and whistling away as happy as a clam at high water.” The Adams Sentinel, August 1844:

Anyone who has ever hunted for clams knows they must be dug when the tide is low. They’re almost impossible to find in high tide, and it would be dangerous to venture too far out into deep water. Thus a clam can said to be quite happy at high tide, since it’s in no danger, at least from humans or other predators, of being made into a meal.

I’m a great fan of chowders, here is my take on New England Clam Chowder.

2. Return three quarters of the bacon to pan, add the cumin, cayenne and stir in the flour slowly and mix until smooth to form a roux.

3. Drain the clams, reserving the liquid. Place the liquid in a measuring jug and add enough water to bring the measure up to 480ml/17fl oz. Gradually add the liquid to the pan with the bacon, stirring until it thickens.

4. Add the potatoes, chopped celery leaves, salt and freshly ground black pepper and bay leaf, bring to the boil and simmer until the potatoes are tender. Then add the 50:50 milk and cream, and cook further for 3 – 4 minutes or until desired consistency. If the chowder is too thick, thin down with some milk.

5. Add the clams and the butter and heat, stirring continuously, for 2-3 minutes but do not allow the mixture to boil. Stir in the chopped parsley. Pour into a bowl, garnish with reserved bacon and serve.